Here are the detailed sleevenotes for the Going Up K-Space CD which were originally on my old website. 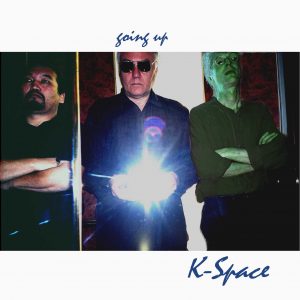 One of the things this album – GOING UP – is about, is how we hear. And how we listen. And how we feel.

We have all developed the habit of shutting out so much sound in our everyday lives. We filter out the sounds we feel that we do not need to take heed of.

We have trained ourselves so well that when we visit the nature we don’t hear half of what’s going on. Consequently we fail to pick up on a lot of information which reaches our ears in the forests, by the lochs, or on the mountains.

This natural soundscape is not mixed in a studio. Some loud sounds are faint when they reach you – because they are far away. Often the sounds are distorted by the topography. If you take a tape recorder with you into the nature, and play it back when you get home, you might be surprised at the range of sounds you missed when you were there, on the spot. When you listen to the tape – in part, because you are not distracted by the visual signals – you hear things differently.

Because we do not classify these natural sounds as music, we don’t even think about whether the birds are singing in the same key, or tempo. But when we listen to music we try to make sense of it, most often in purely musical terms, checking how the rhythms and pitches inter-relate to each other, assuming that they were intended to inter-relate according the musical rules we have learned, even subliminally.

We are in the habit of doing a lot of this analysis by using our intellect. But this is not the only way to hear music. Especially if the particular music is not constructed on that basis.

When a shaman moves into an altered state, into a spirit world, he or she does not analyse what he or she encounters by the rules of ordinary perception. The way this album was produced is a departure for all of us in K-Space.

Technology made it possible for us to assemble pieces where the music is made up of episodes from different places and different times. Yet these episodes are being heard simultaneously. But none of those episodes was treated for pitch or tempo to make them fit into unified musical rules.

This process in its essence is not new. When shamans gather to do a ritual kamlanie, the sounds they produce with their drums and bells and voices do not conform to musical rules. Neither do the other sounds you hear from the crackling of the fire, to the wind in the trees, to the dogs barking in the distance, to the hawks circling and whistling overhead.

The drumming of the shamans does not directly represent the visions they experience, only a feeling – a sense of reaction to a picture from life’s other side.

In Russian “k” means towards and “prostranstva” would mean “a space”, so “an opening up”, here meaning “opening connections to the cosmos”. This is not folkloric, it’s a completely different style – probably we can say experimental music.

Here there are very many sounds, and sound is extremely important. Each person must feel it with the heart, the mind, the head, the body.

Here is a music that’s collected/concentrated from the whole world, as the very important astro-physicist Professor Nikolai Kozyrev said.

This is his spirit – from Vladivostok to Western Europe. It encapsulates the feeling of the people of our earth – it’s a music that combines everything.

If any person feels it, he’ll be touched by it. We can say it’s international. This means it’s contemporary, it’s of the future; people will come to know it.

The process of this music requires that it works a lot and associates itself with people very many times. This is music that is not for itself but for people. That’s how it can be understood.

None of the singing uses words, the only words are spoken by other characters who appear.

Maybe in the future we’ll use different instruments, new sounds. We need to look for new sounds which feel right.

Of course the dungur (shaman’s drum) is our root; without it our music couldn’t be. The dungur without fail.

Lots of folk musicians are starting to improvise in Tuva now. It’s the lesson they got from me, the Gendos disease.

Composers listen (perhaps inwardly) to music and think about….music. Here we listened, and thought more about the listening itself. The thing that triggered this was that in 2002, after six or so trips to Siberia, we found ourselves faced with a mound of field recordings. Field recordings are eloquent about their circumstances. Essentially a field recording is a recording of sound in the world. In contrast there are other kinds of recording where the world is edited out so far as possible to focus on a ‘pure’ musical sound. This purity is provided by the abstract space of the studio, or the conventional space of the church or concert-hall. This is the way things generally go in recordings of western music, where the question of the scene – the bit of the world enveloping the music – is never examined. But in field recordings it seems unavoidable.

Thinking about film music is relevant here. I’m not talking about ‘cinema for the ears’ – where presumably sound somehow replaces vision and functions like vision -, but about ‘implied cinema’, about the capacity of sounds to convey the feel of scenes. This is done by 1) the sound being recognisably from a source, so acting as an indicator of the presence of the source 2) the spatial character of sounds, such as reflection-content, which tells of the position and movement of the source in a space, and so tells of the space itself 3) the temporal character of sounds, which fixes the chronological time of the scene.

In contrast to all this is the capacity of music (as a special kind of sound) to melt down the organisation of those scenes. However, the meltdown is not quite instantaneous, and it must get less so in an era without a single dominant musical language. Listening to recorded music, there is usually a kind of moment of adjustment where we unconsciously form an impression of where and when the music was played. And other quick adjustments are needed for the listener to tune in to what it is that she is supposed to be listening for, and – very important this – what it is she is supposed to be not listening for. (Example: microtonal differences, in ‘classical’ music.)

So all this constitutes a kind of phenomenological ‘already’ – stuff that’s already there before you can even begin. And of course, as we started to listen to field recordings of musical performances, we started to pay more attention to what happened on the recording before the music started.

Note that by this definition, in the age of recording, music is not organised sound, but sound that is not organised to represent a scene and its chronological structure. Nevertheless something strange happens when two recordings of music are superimposed or overlapped; they start to suggest scenes far more than they would do if they were simply listened to one after the other. The moment of adjustment is relived in extended form. Attention is drawn to question the unity of the space-time of each performance. The ear ‘wonders’ about each music, looking for everything not-music in it, searching for clues about the kind of time and space in which the music was played.

As we started to conceive of what this album might be, we realised that we could be engaging with the ear on the level of its presuppositions, the stuff that musical work typically takes for granted. At times a music is played within a scene indicated by not-musical sounds but the scene does not appear to be the scene in which the music was actually played. At times we listen to a scene as if it were music – i.e. without interpreting the sounds and their chronology as only or mainly the representation of a scene. (This obviously connects to Pierre Schaeffer’s idea of écoute réduite.)

At times we are invited into a conventional frame – for example that of the documentary soundtrack. Here the scene expands to include the listener, who takes on the role of watching/listening to a representation of, say, ‘life in a yurt’. So this is more about the ‘content’ of the scene, because the listener is suddenly picked out as a consumer, a westerner, peering into an other, in this case oriental, world.

So this interaction of sound and music will produce different outcomes depending on exactly how it is done, and on the exact accent placed on each. Like those M.C.Escher drawings of impossible staircases, scenes merge into pieces of music that turn out to have been performed within other scenes.

You could see this as a particular way of inscribing the generally reflexive character necessary to any artistic work. In other words, the thing in front of you, the thing you hear, always comes back to itself and to its circulation with, and in, you the listener.

So in this sense ‘Going Up’ is not the upwardness of metaphor, but (hopefully) of experience.