The view above looks South to Fife and was taken from the Law, a cone-shaped volcanic plug in the middle of Dundee. Behind the city to the North are the foothills to the Grampian 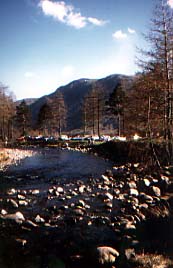 The city used to be known for its jute mills until the tail end of the last century when the industry died out. And at one time, because local musicians were heavily into soul music, critics talked of the “jute mill gospel sound”. Local soul food delicacies include Arbroath Smokies (smoked fish), and Forfar/Dundee Bridies – mince and onion in a D-shaped pastry – almost identical to the Siberian cheburek.

Although I grew up in a tenement like most Dundonians – mine had a great situation. There were jute mills all round, but right opposite my bedroom window was Dudhope castle. 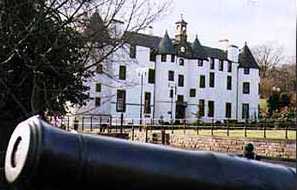 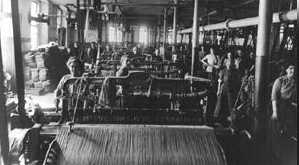 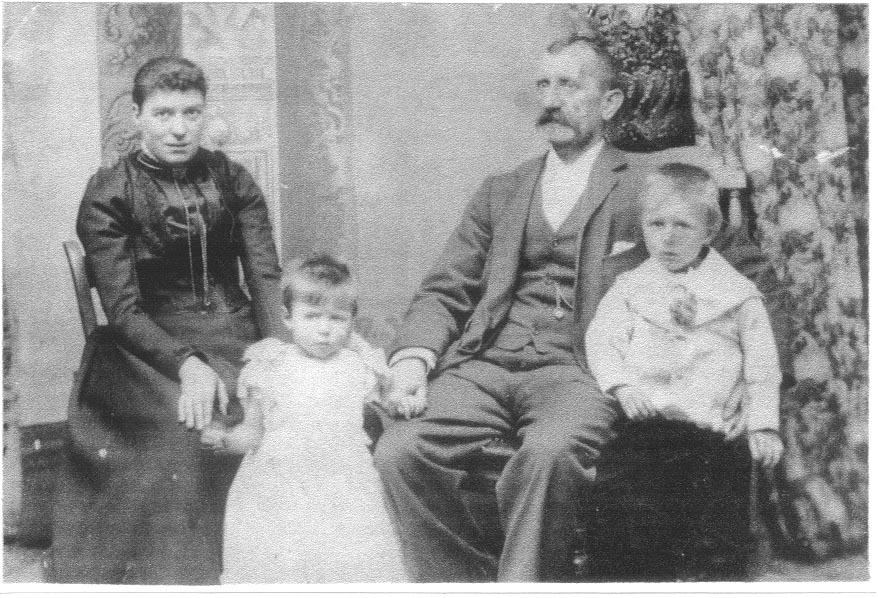 Above, my great-great grandparents in Dundee, 1900.

Back home in Dundee I started playing as a kid in my grannie’s kitchen, using pots and pans. She used to play piano and improvise within the Scottish tradition. 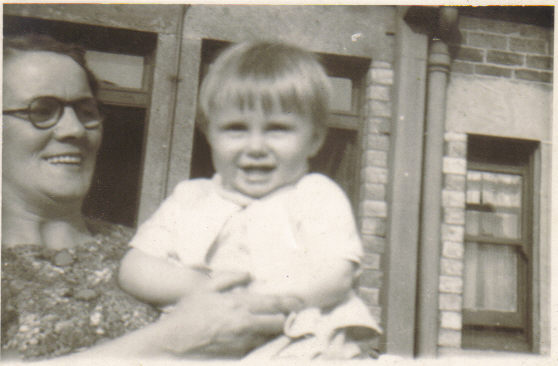 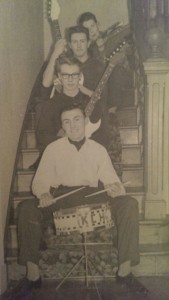 Above, my grannie and me, and right, my first band at school, aged 15.

A form of improvised singing – called “diddling” – was my joint introduction to folk music and improvisation. She was my inspiration and she encouraged me, giving me my first gig when I was 14 in an old folks club in a church hall. Later I realised she was part of a long line of Picts who lived around Dundee long before the Scots arrived. 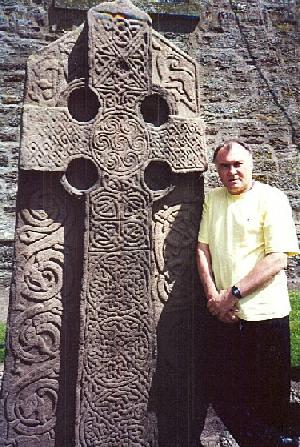 Since then, I`ve drummed and played the northern hemisphere the long way round from Vancouver to Vladivostok with a lot of jazz musicians and ethnic musicians including Russian gipsy diva, Valentina Ponomareva , the late Vladimir Rezitisky, Celtic musicians Dick Gaughan and Tomas Lynch, Tibetan and Japanese Buddhist monks, and Siberian shamans.

With Pictish stone at Aberlemno, near Dundee.

At the end of the 1960s I formed Talisker, a band set up to play jazz and Celtic music. We recorded a few albums and played round Europe. I moved to London and began opening up my music to influences further afield.

Back in the DDR, Talisker – with Paul Rogers, bass and Ted Emmett, trumpet – plays the Bauhaus, with Eugen Hahn, tour manager,centre. A boxed set of the Peitz festival we played on that tour has been released, along with performances of a lot of bands. Get it here.

strongest folk singer and musician, Dick Gaughan. It was a departure for Dick, not because it was a purely instrumental album, but because it was totally improvised. Here’s what Dick said about it: “The collaboration between Ken Hyder and myself was, on the surface, a strange one – but on closer inspection perhaps wasn’t quite so strange after all.

“I had never really done much free improvisational playing but we jammed together whenever I was in London and did a lot of talking. Especially we talked about the use of traditional Scottish music as the launchpad for improvisational exploration and this album came out of those discussions.

“I found playing together an exhilarating experience and the concept of abandoning all conventional rules of melody, harmony and rhythm and stripping everything down to basic elements then reassembling them, concentrating entirely on expression, was a very liberating one and has had a strong influence on much of what I’ve done since in that most of the song accompaniments I do these days are improvised.”

I’m currently engaged in a range of projects ranging from the freely improvised to rhythmic music coming from funk and other areas.

Among the other musicians I’ve worked with are Keith Tippett,  Paul 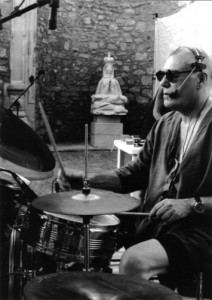 “Ken Hyder’s drumming always appears connected to the world beyond narrow musical concerns. It comes with a context, picking up on place, the past, people met and local practices.

“Hyder has one of the strongest strokes in jazz, deployed with an astonishing technique. Not for a moment does his polyrhythmic machine falter, his four limbs continuing to beat with an implacable precision” 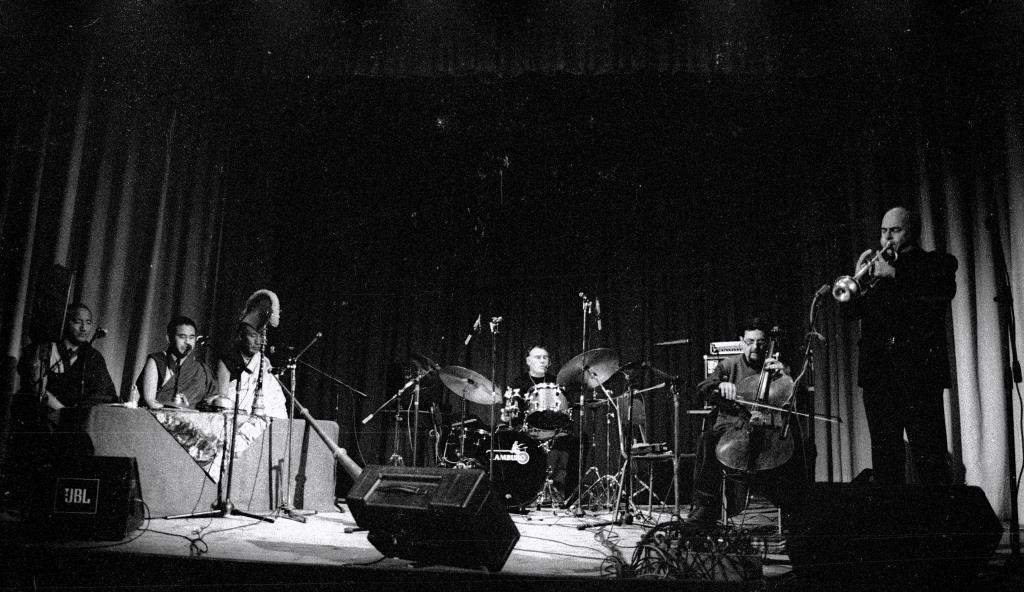 One of the many impressive people Tim Hodgkinson and I met in Tuva was a Lama, Kungaa-tash ool-Buu. We first met in him 1992 on the day his temple – or khram -was opened and consecrated. Before that he had been studying to become a Lama, over the border in Mongolia.

He was warmly generous and had a particularly strong presence and he told us that his father had been a shaman. A few weeks later he wrote and said that in fact he had been an underground shaman for the last 30 years, dodging KGB officers who sent shamans to the gulag if they discovered them. He was also a painter and a magnificent stone-carver, and carried on the local tradition of shamanism centred in Erzin on the Mongolian border.

He became my teacher. 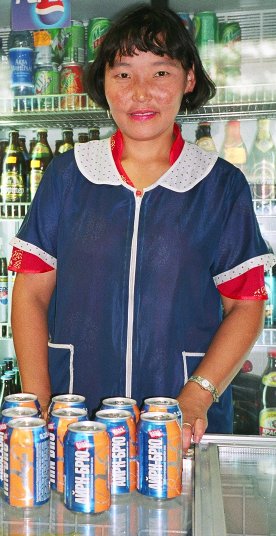 The Siberian/Scottish connection is strong – you can now stock up with Irn Bru in Kyzyl, Tuva.

And back home, getting re-connected in a stone circle near Loch Tay, Scotland. 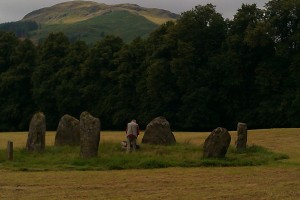